The upper and lower sections of the Russell Fork offer fantastic views and great Class II-III action. The upper is fantastic for intermediate paddlers who want to work on surfing and boofs, the lower is a great beginner/intermediate training ground. If we could only figure out how to jam them together!

The traditional put-in for the upper is the Bartlick splashdam just downstream from the confluence of the Russell & Pound. Many will travel on and put in below the Flanagan Dam (on the Pound) which adds maybe 2 miles of Class I-II and a half hour on the shuttle.

If the natural flow exceeds 400, highly recommeded to drive directly into Haysi and put in on the downstream end of town. Adds over 3 miles of Class II-III with the same distance shuttle as the Bartlick put-in. There are two river-wide ledges on this section that get sticky above 800cfs. Boofable in the middle below 800 (strong stroke), run far left on the first and far right on the second at 800+. 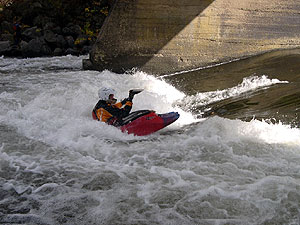 This is probably the most dangerous place on the upper. The splashdam is totally runable in the RIGHT spots only. There are 3 footers across the river making 4 "spans". STAY AWAY from the two river left spans. At release, the second from the right is your friend, there's a tongue running left of center at the horizon line. Get on it and stroke through the hydraulic. Above 2000cfs, use the far right span (against the riverbank). Many folks will play in the slightly sticky hydraulic at the bottom of the second span. That's the only safe play at Splashdam.

Below Splashdam you'll paddle a 1/2 mile of friendly Class II ripples and wavetrains. There's a great ender spot on river left (a big shoal with a cliff and large eddy at the bottom) about half way. The Railroad rapid follows a long pool called Skegg's Hole (you'll be able to see Skegg's Gap up on the Pine Mountain on river left). The river bends right into railroad, made obvious by the trestle and spectacular cliff wall framing the rapid on river right. Easy line is to start right and stay there until the end.

The traditional line is to stay right at the top until under the trestle, then catch the eddy's under the trestle and bust a ferry to a an eddy below the trestle on river right. There's a great wave/hole next to the eddy. Surf that sucker, then wheel around and paddle for a boof in the center of the flow. A large rock in the the middle of the stream ends the rapid, run to the left of it. This entire rapid can be run anywhere. Be creative!

Below railroad, there are a couple of rapids leading to Twenty Stitches. The first is a set of slots between large boulders at the top. Generally, anyone goes...but watch, the more middle ones can collect wood. Easy to boat scout. There's a large hole in mid-stream near the end of this rapid. Miss it.

You'll then hit a split in the river, the most fun route is left of the island, but either way works. You'll then be at 20 Stitches.

The hardest (not longest) rapid on the upper, a solid Class III+/IV. Scoutable on the river right bank. The traditional line is to enter the top of the rapid on river right into a setup eddy. Then work your way into the center eddy across some strong flow upstream from a large boulder in the right center of the streambed. From there, you have several choices. To cheat, keep busting to river left and point downstream punching some slight holes. 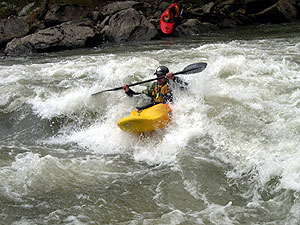 The big line is to peel out of the eddy heading to a funky looking curler just to the right of the large boulder. There's a pourover hole just to your right and a funk hole next to the rock. When you get to the curler, give yourself some left hand angle and stroke hard through the curler between the two holes and into an eddy behind the big boulder. This is all very funky water, so maintain! You don't have to hit the eddy, but it gives you more options for the rest of the rapid. You can just keep on going if you want to. Just downstream there is a very tempting feature that sure looks like a great boof. DON"T. At release, you just land on a bunch of rocks and get worked in a hole that they've knocked you into. Run to either side of that "boof". There are a couple of holes to miss and some very dynamic diagonals coming off the right going on toward the end of the rapid. Brace against them and power through the hole at the bottom. There'll probably be folks lining up to try a very dynamic surf in the bottom hole. There's a ledge downstream of this hole (not river wide), but you can pretty much run anywhere over that. Left is the smoothest, there's a mini boof in the middle.

Once past Twenty Stitches there a few short ledge style drops that can pretty much be run anywhere. Again, be creative, they all end in pools. You'll hit a longish pool before hitting the last named rapid, Johnny Rock.

This is the longest rapid on the upper, Class III. It's kind of obvious because you can't really see the bottom from the top. The easy line is river right. The top horizon is separated by a large boulder, there's a fun boofy line on the left of the big boulder. That's the hometown line. It's not a high boof, but it's into very fast moving water that carries you downstream between two large boulders. Catch the eddy behind the middle rock and decide which way you want to go. The leftish line (traditional) is a little squirrely and very pushy, so maintain between another couple of rocks and catch the center eddy. It's very tempting to catch eddies on the river left here, but they can be a bitch to get out of. There are also a couple of smallish, but very sticky holes in here, stay to the edge of them. You're now about halfway down the rapid. Peel out of the big center eddy and ride the large wave-train toward the big rock at the bottom of the rapid. That's Johnny Rock. It's tempting to want to splat, but don't. It's an undercut/seive. A fun hydraulic is on the river left, stop and play a bit. 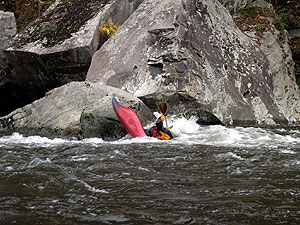 After Johnny Rock, there are 4 more smallish rapids before the Garden Hole takeout. Again be creative, you can really go anywhere!

If you just haven't had enough here, you CAN paddle through Garden Hole and run 3-4 GOOD Class III+ drops and carry out Camp Branch Creek on river right (a bit over a quarter mile to the creek). But if you pass Camp Branch, you're pretty much committed to the gorge.

Paddle downstream from Rat Hole through Pool Point, under the high trestle and stay on river left around the island. Run that rapid down right center around the island. About 150 yards down stream, you'll see a horizon line. This is the MeatGrinder.

This is probably a III+, almost IV at release. It's 3 quick drops. At the top, there is a boulder in the middle of the river that splits the stream (there's even a spindly tree on it). To cheat, go to the right of the boulder and just punch between rocks to the bottom, staying right.

The mainline, at release, is to run to the right side of the top pourover just to the left of the boulder. There's a tongue there, get on it. DON"T try to punch the pourover. From there you can either catch the right eddy (behind another boulder) or keep going to the second drop. Best to hit it just left of center. There's a neat move from the river right eddy, below the boulder. Ferry across the current and across a plankish feature in the second drop aiming for the river left eddy below the second drop. This is a dynamic move, but a great way to test yourself. The last drop is really a jumble of boulders that create a hydraulic/hole across the river. Hard to boof the rocks, easiest out is the far left slot, but any work if you aren't sideways.

Another couple hundred yards of wavetrain/boogie water leads you to the second named rapid, Pinball.

Below Pinball is a long pool (Long Hole) then Class II boogie/play stuff on into Elkhorn City.